Bill had a total of three surgeries to remove cancerous lesions from his chest and belly. After every surgery, Bill bounced back to his old self within a week. This first surgery was in April of 1998 to remove a single tumor from his chest.  In the second surgery in August of 1998, more tumors were removed in addition to removal of a lymph node from his right front armpit . The third (and last) surgery, in November of 1998 was more extensive than the other two. A total of 13 tumors were removed in the three surgeries.  In February of 1999 the tumors returned in sufficient quantity to rule out any further surgeries.  By the end of March, Bill, chest, stomach and front legs peppered with tumors, had started to refuse most food, even treats like bits of steak or chicken. He still loved to go for his walks around the neighborhood or to the park - even right up until an hour before he died. There was always another tree to pee on or a mailbox post that needed to be sniffed. 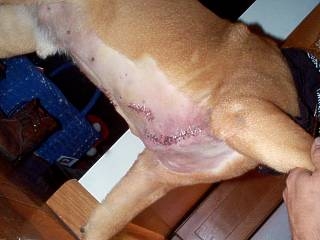 The third and last surgery - November 1998 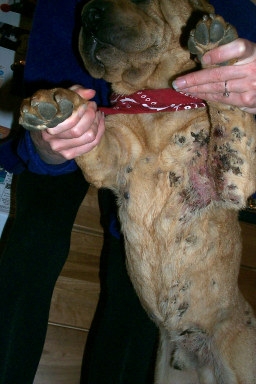 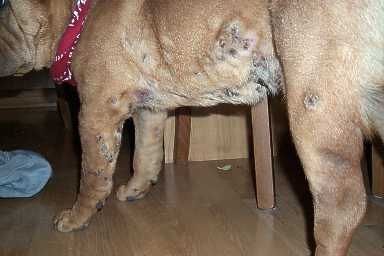 Bill had stopped eating when we took these pictures, April 1, two days before we had him put to sleep.